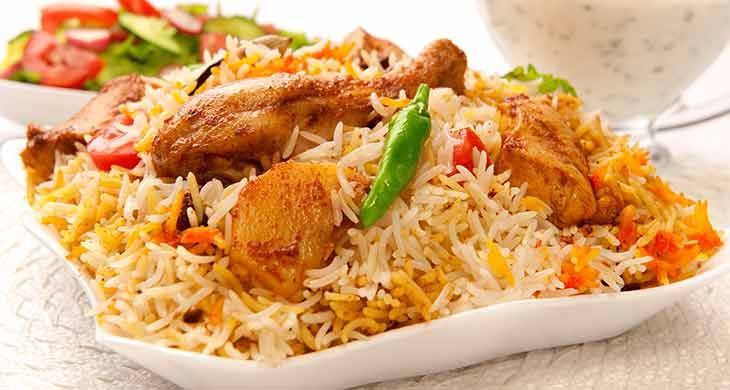 Biryani is the Favorite Food for Indian People

If your favourite food is biryani, then you want to know about it, you would recognize that a plate of rice cooked with  meat and sweet-smelling herbs, there is no specific place in India that you could point as birth place of this tasty rice, it is generally connected with Hyderabadi cooking of South India, Mughlai cuisine of Delhi and Awadhi cuisine of Lucknow. Every place has there own style of cooking. If you order food in Lallabi Homely food  kerala, we will deliver you the best chicken biryani Just for Rs:1/- at your doorstep. This offer is applicable for kerala people and those who order food online for above Rs: 300/-. Don’t worry soon we will expand our delivery locations in all major cities. If you want to become a food delivery agent of lallabi.com. contact us- 080-46616600, 9072330044

In  Irish proverb – Laughter is brightest where food is the best, we can confidently says that laughter is the best when the food is biryani. Whether you about biryani where it is started, So Don’t  worry about that now we will tell you journey of biryani.In south India mouth watering dish is Biryani. In northern India, it is generally associated with the Mughals in Delhi or the Nawabs in Lucknow – both the varieties known for the rich taste and flavours. In south India, it is the Hyderabadi Biryani which is more tasty.

After the British drive out Nawab Wajid Ali Shah to Bengal in 1856, the Kolkata Biryani appeared. Normally known for the utilization of potatoes, it tastes of a former time – rich flavors, meat and pieces of potatoes, this makes up for a healthy dinner.

When we want to Know Calcutta Biryani in Lucknow, it is famous reciepe for this dish in the country. The taste of the Lucknow biryani is similar to the Kolkata biryani, and it has the additional tinge of flavours added to it, which should be felt and appreciated more than seen. No matter where ever you are in India, you are never forget a plate of biryani.